The best option for people that are looking for a cost effective and next-day Apostille Service.

The fastest London Apostille Service. Documents ready on the same day we receive

Need to get your documents Apostilled?

Contact us to receive a free consultation on what needs to be done to get a FCO Apostille.

Are you looking for Consular Legalisation?

Consult our legalisation guide to check the consular requirements to get your documents legalised.

What is an Apostille?

An Apostille (also known as Hague Apostille) is an official certificate issued in the United Kingdom by the Foreign, Commonwealth and Development Office (FCDO) certifying/attesting a document for use in another country, pursuant to the Hague Apostille Convention 1961. The Apostille is an abbreviated method of legalisation that certifies/attests the Solicitor’s signature, Notary Public’s signature and seal or a signature or seal from a UK government official/department such as from the Court, HMRC, ACRO Office, NHS, General Register Office (GRO).

Summarising, countries that are signatories to the Hague Convention 1961 (Convenzione dell’Aja/Convenção de Haia) have agreed to do away with the lengthy legalisation process via foreign consulates and embassies and accept documents with the Apostille as authentic. An Apostille (Apostila dell’Aja/Apostila de Haia) in the UK is issued by the Foreign, Commonwealth and Development Legalisation Office (“FCDO”), in Brazil by Notary Public Office (Cartórios) and in Italy by the Prefectures of each Province.

With an Apostille certification, a notarised/certified document is entitled to recognition in the country of intended use and there is no requirement for further certification or legalisation by the country of recordal’s nearest Embassy or Consulate in the United Kingdom.

We provide Hague Apostille legalisation by the UK FCDO Legalisation Office in London (Premium Service) and in Milton Keynes (Standard Service). The processing time via premium service in London is usually within 4-6 hours if the documentation is received by 11:00 am and via standard service in Milton Keynes is 1-2 working days (next day service if document is received at our office by 11:00 am). The turnaround time is guaranteed if the signature of the UK public official is registered on the FCDO database. 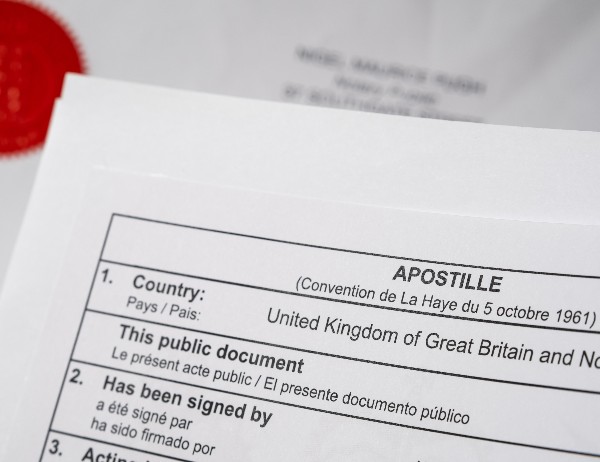 The FCDO can only issue an Apostille to foreign original documents if such has been verified with the issuing institution/authority overseas by the notary public or solicitor. If qualified solicitor or notary public when certitying the foreign original document must provide a separate sheet certificate attached to the documentation stating the authenticity of such foreign document and has been verified with the issuing body overseas.

***It is important to note that original documents signed/stamped/sealed by UK public officials can only be Apostilled IF the public official’s signature/stamp/seal is registered on the FCDO database. If the signature is not registered, the FCDO need to contact the public department/signatory (e.g. HMRC, ACRO Office, General Register Office (GRO), Medical Practitioner (GP Practice), Court, etc) in order to verify the official’s signature/stamp/seal before Apostilling the document. The verification process may take anything between 1-5 working days to be completed, depending on how fast the relevant public department/signatory responds with the requested information. This process is performed independently between the FCDO Legalisation Office and the relevant public department/officials.***

Upon completion by the FCDO, we can further process the documentation, if required, via the London Chamber of Commerce, Embassy or Consulate in the UK and either return the documents to the final destination. Our usual practice is to provide scanned copy of any legalised document and tracking details by e-mail before despatching the completed legalised documentation.

if you wish to find out more about how to process your documentation and fees, please contact us at info@wlegalisation.co.uk or call us on 020 3633 4575.

The purpose of the Convention is that it abolishes the requirement of diplomatic and consular legalisation for public documents originating in one Convention country and intended for use in another.

Consular officials in Convention countries are prohibited from placing a certification over the Convention Apostille, although, some foreign consulates still do. Please see a list of the countries which are Signatory to the Hague Convention and require Apostille only as the method of legalisation.

Are you looking for Country Requirements?

SEE ALL OUR SERVICES
We use cookies to ensure that we give you the best experience on our website. If you continue to use this site we will assume that you are happy with it.OkPrivacy Notice